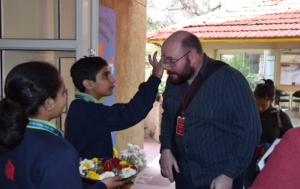 The Shri Ram School hosted author P. G. Bell for an interaction with children of Grades 4 and 5 on 29th  January 2020, for a fabulous session centred around his book , ‘The Train to Impossible Places’.

He spoke to the children about books he had read as a child, that influenced him as a writer. After a brief introduction to the plot and characters of his book, he shared how the book had grown out of a bedtime story for his son.

Using three thinking prompts, he encouraged children to brainstorm ideas for characters & settings for new adventures. The responses were humourous and thought-provoking. 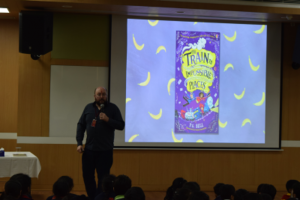 In his words, “My aim is to encourage children to think about their own creativity and give them the confidence and inspiration they need to take the next step in developing their ideas.”

Children enjoyed the session and are quite excited to read the book as well as its sequel, which has just been released.