Students of Grade 5 had an interaction via Skype with author Supriya Kelkar who has penned the book, ‘Ahimsa’, which was the book chosen for the novel study under the aegis of the Reading Programme this year. 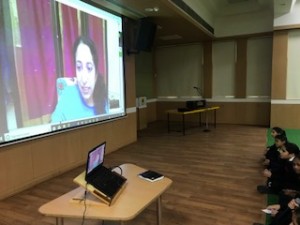 watching three Hindi movies a week. After college she got a job as a screenwriter for Hindi films and has worked on the writing teams for several Hindi films, including ‘Lage Raho Munnabhai’. She is the winner of the New Visions Award for her middle grade novel AHIMSA which is  inspired by her great-grandmother Anasuyabai Kale’s role in the Indian freedom movement.